The 2019 Connacht Rugby Summer Camps with totalhealth Pharmacy are coming to the West of Ireland, and this year they’ll be bigger than ever!

The Summer Camps, which are run by fully accredited IRFU coaches, are open to boys and girls between the ages of 6-12 and no prior rugby experience is necessary.

Children will get to experience the sport in a fun, safe environment while developing the basic rugby skills and making friends.

As is tradition, a number of Connacht Rugby pro players will also visit every camp, giving kids the opportunity to meet their heroes and play games.

Registration is open at the cost of €85, and every child who attends will receive our brand-new Connacht Rugby ¼ Zip Top as well as a rugby ball at one junior ticket to a selected Connacht Rugby match next season at the Sportsground. 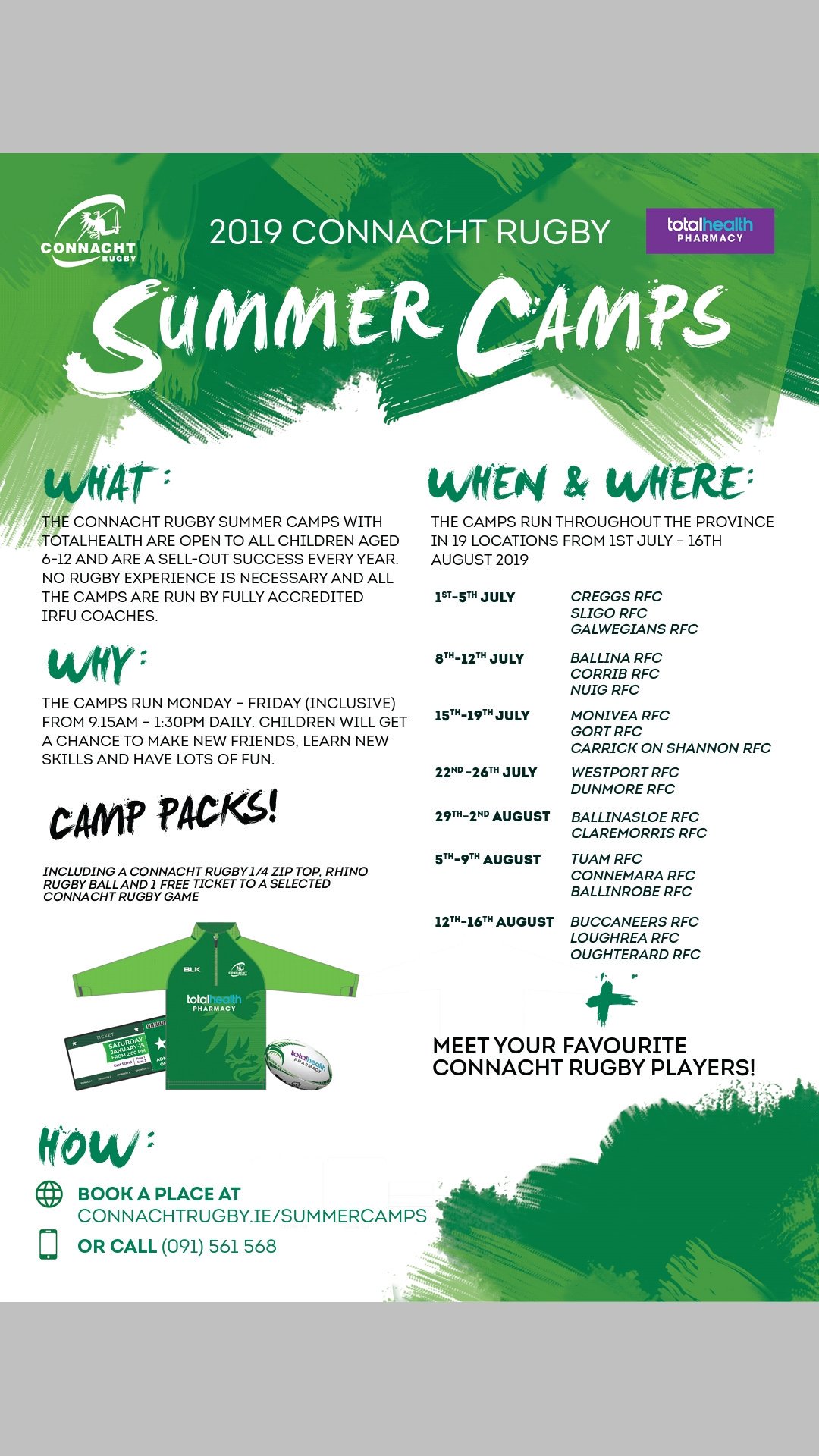 The Club 100 Draw is an initiative to help build a sustainable regular income
for the club going forward. The Committee of the club are looking to build
on the recent pitch developments and improve the overall facilities at the
grounds.

The Club 100 provides a convenient way for all to contribute towards the
club’s future.

See below for full details.

March 12, 2018 in Minis, News by admin  |  No Comments
This three-day Connacht Rugby Easter Camp takes place in Abbey Secondary School (Carrick on Shannon RFC) from March 27th to March 29th, and costs just €50.
No rugby experience is necessary to attend, the Connacht Rugby Easter Camp is an introduction to the game of rugby in a safe and controlled manner. The camps are for both boys and girls aged from 6 to 12 years of age and will be managed by fully accredited IRFUcoaches.
Children who participate in the camps will get the chance to make new friends, learn more about rugby values such as team work, commitment and integrity.
They will also become more aware of the importance of physical fitness and will learn to develop the basic rugby skills of passing, tackling, evasion and kicking and perhaps most of all have a lot of fun to boot! Each child will receive a rugby ball on the final day.
This camp takes place over three days from 09:15am to 01:30pm. If you need to collect your child earlier, please make clear arrangements with the Camp Administrator. If there are any underlying issues with child collection that we need to be made aware of, please inform the camp manager on the first day.
On Tuesday morning at the start of the camp, parents are requested to enrol their child/children between 08:45am – 9:15am. On enrolment children will be introduced to their coach for the three-days, so try and get there early!
To Register click here
What to Bring:
Arrive togged out and ready to go.
Bring a change of clothes in case it rains.
A mouth guard/gum shield is required during all activities on camp.
Bring rugby or football boots with regular studs.
Bring a packed lunch [please pack a healthy lunch for your child]
For further information about the camps, email emer.dowd@connachtrugby.ie.

September 2017, the IRFU launched the ‘Spirit of Rugby’ initiative which aims to support players, coaches, volunteers and parents. It’s primary purpose is to educate those within the game about their rights and responsibilities both on and off the field. The aim of the Spirit programme is to embody and promote the core values of the game – Respect, Inclusivity, Integrity, Fun and Excellence. Safeguarding of minis and youth players is also a TOP priority, ensuring that players develop to the best of their ability in a safe and fun rugby environment.

Carrick on Shannon RFC were honoured to receive the first ever ‘Spirit of Rugby Award’ in recognition of their outstanding work in Safeguarding. Club President, Peter Layden and Club Welfare Officer, Maeve Lenehan were invited to the Aviva Stadium on Saturday 10th February where Maeve received the award from Philip Orr, IRFU President, at a pre-match lunch. Afterwards, they watched the Ireland vs Italy game from the comfort of the Presidents Box.

Well done to Maeve and all at Carrick on Shannon RFC for the great work carried out in the area of Child Welfare.

Carrick RFC will be hosting two great Connacht Rugby Summer Camps in Carrick on Shannon RFC from 10th to 14th of July 2017.

The cost for this camp is €95 and includes a quality Connacht Excellence Camp jersey and a Connacht Junior Ticket to a selected game.

Booking early is advisable and must be done on-line.

The Carrick on Shannon RFC AGM will take place in the Bush Hotel on the 19th May at 8pm. All club members are cordially invited.

A combined U8 and U9 squad travelled to Castlebar last Saturday to take on Connacht’s finest in their Connacht Blitz. The determination displayed by the U8’s playing up a level for the first time left most spectators mesmerised.

First up was a strong Barna Team but the combined Carrick team with a belief in their ability and training battled to a fine victory.

Next up was a big strong Gort side, in an ill tempered affair marred by foul play and questionable refereeing  Carrick was narrowly defeated.

Finally, Carrick played Monieva in a sparkling fast moving game played in the best spirit of the game where both sides played attractive open rugby, Carrick prevailing with a last minute try to seal victory.

The coaching staff would like to take this opportunity to thank all the parents and players for their commitment throughout the year. We would also like to remind the under 8s that they have a special blitz next week in Mullingar.

Carrick U10s had a great day at the Connacht blitz in Ballina. They took part in four tough games beating Loughrea and Castlebar, drawing with Ballina and losing to Gort. Great effort from all the players, they have really improved over the season and all their hard work showed on the day.

Carrick U16s travelled to Castlebar for the first round of the Connaught plate on Saturday last.

The match was evenly contested at 3 points apiece when Castlebar took full advantage following an injury to Alan Crowe scoring a try just before half time.

Midway through the second half Castlebar went over for a further two tries leaving the score 20-3. However Carrick rallied with two tries from James Maguire, one following a quick tap penalty from Paul Woods and the other from a line out catch where on landing, Castlebar decided not to commit to the maul so Maguire turned on a sixpence and waltzed through untouched for a fine individual try.

It was now 20-15 with 5 minutes to go and Carrick with nothing to lose laid siege to the Castlebar line. After continued infringements the referee warned the home team that if they were to infringe again he would award a penalty try but time was not on Carrick’s side and soon after the final whistle went.

Carrick on Shannon RFC would like to congratulate Abbey College Boyle on winning the Connacht Junior Emerging Cup last Wednesday defeating St. Joseph’s of Foxford by 24 – 18.

Fundraiser in aid of the Rebecca Hollidge medical fund

Rebecca has a medical condition that requires her to travel abroad regularly to  receive medical treatment. The costs associated with this treatment is significant and on Friday night March 31st the Hollidge family will host an Auction night in The Bush Hotel to raise funds to help pay for the treatment Rebecca requires.

Rebecca’s parents Peter and Yvonne are well known within the Carrick rugby community where Peter has coached and refereed for many years at mini’s and youths levels.

Club members past and present are asked to come along on the night and show their support Peter and his family for this very worthy cause.

Tickets available on the door on the night.